The Registry Editor utility, invoked by entering regedit into a command line, displays the registry as a tree of keys and subkeys (represented as a series folders and subfolders) with name/data pairs as entries within each key (or subkey): 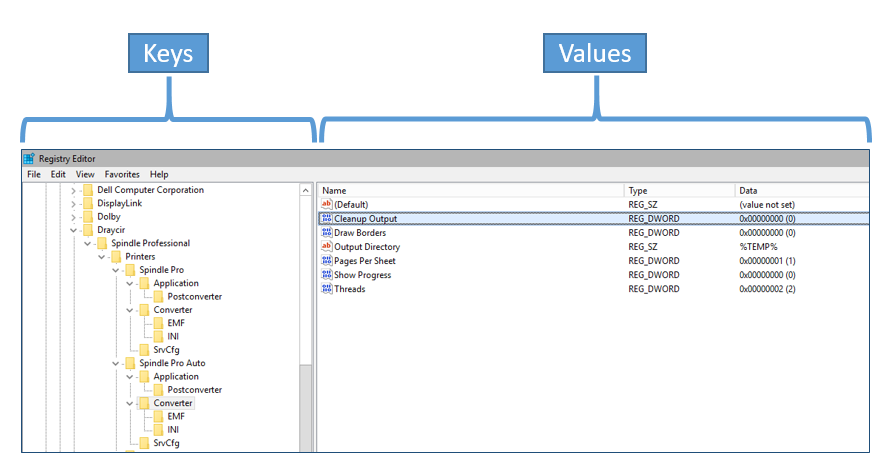 The key tree structure is described in much the same way as Windows file and folder paths, so the above key would be referred to as follows:

In order to modify any part of the HKLM hive, the user must run the registry editor as Administrator. Non-administrator users can (unless explicitly prohibited elsewhere) modify the HKCU hive without administrator rights.

The registry editor allows the user to add, remove or modify keys, value names and value data, which is fine if the number of changes is small, but in the event that several keys must be updated in one go, or in cases where a single change is required across a number of PCs, then changes can be imported from a .reg file. This is simply a plain text file saved with a .reg extension. For example, to modify the data of the Cleanup Output value above we can simply copy the following to a notepad file and save it as change.reg to the desktop:

Almost all changes to the registry for Draycir products are located inside either HKLM\Software\Draycir, or HKCU\Software\Draycir. The Software subkey holds settings for all native applications, so on a 64-bit OS, these will be the settings for 64-bit applilcations. To provide backwards compatibility for 32-bit applications on Windows 64-bit, an additional pair of subkeys was created inside Software, labelled WOW6432Node (it stands for Windows on Windows 64-bit 32-bit Node) which holds the settings for 32-bit applications and processes. This is summarised in the tables below:

If the path to the Registry key to modify includes Wow6432Node and you are running on a 32-bit OS, then ignore the WOW64632Node part of the path.

Draycir Software and the Registry

Most of the times you will need to make any changes in the Registry, you will be modifying data in one of the Software/Draycir subkeys. You should only make changes here with direct supervision from Draycir support or based on written documentation such as this Knowledge Base.